Today we have officially used all the resources for the year !

We are using up nature’s resources 1.75 times faster than planet’s ecosystems can regenerate them.

Humans have exhausted all natural resources the planet can sustainably supply for 2019 faster than ever – overshooting by more than five months.

As we consume and destroy more than ever before, the Earth Overshoot Day (EOD) keeps getting earlier. It was marked on 2 August in 2017, 1 August in 2018 and this year it is on 29 July – two months earlier than it was 20 years ago.

Due to increased consumption and a growing population we are now using up nature’s resources 1.75 times faster than the planet’s ecosystems can regenerate them.

The results of this ecological overspending is becoming increasingly evident in the form of deforestation, soil erosion, biodiversity loss and the build-up of carbon dioxide in the atmosphere.

Mathis Wackernagel, co-inventor of Ecological Footprint accounting and founder of Global Footprint Network said: “We have only got one Earth – this is the ultimately defining context for human existence.” 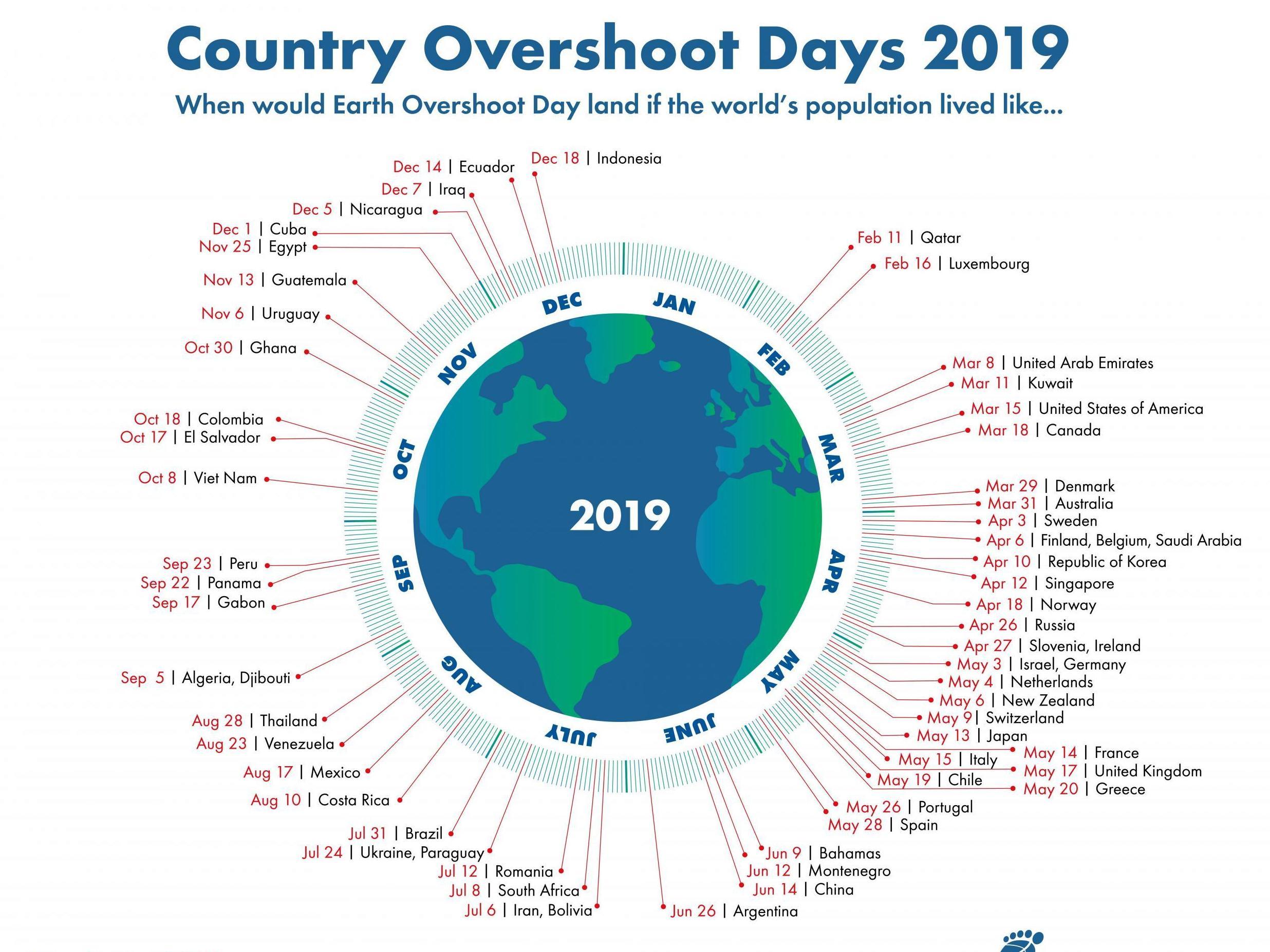 Since the day started being observed in 1986, this is the earliest point in the year on which it has ever fallen. If we could move the date of EOD back by five days each year humans could live sustainably on a single planet by 2050.

Cutting carbon emissions from burning fossil fuels by 50 per cent would move the day back by 93 days.

Aaron Kiely, Friends of the Earth climate campaigner, said: “Earth’s resources are finite, and we are in a climate emergency. Today is a warning about how wrong we are currently getting things because this isn’t an overdraft we can dip into and pay back.

Since the day started being observed in 1986, this is the earliest point in the year on which it has ever fallen (Earth Overshoot Day)

“We know what the solutions are so it’s time to be hopeful and bold and grab the opportunity to make a positive difference while we still can.”

EOD is calculated by Global Footprint Network, an international research organisation that observes humanity’s use of natural materials, as well as the environmental damage they cause.

Friends of the Earth warned that we need to “think again about how we consume”.

Mr Kiely said: “We have to think again about how we consume. Large-scale political intervention is desperately needed, but as individuals there’s things we can do: stop buying what we just don’t need, make things last, insulate our homes, and collectively stop digging ourselves into ecological debt.

“We need this date to become 31 December because we only have one planet and we are gobbling up what can be replaced too quickly, it’s why we need to #movethedate and not overshoot the resources earth gives us.”

We have received your enquiry and will get back to you shortly.